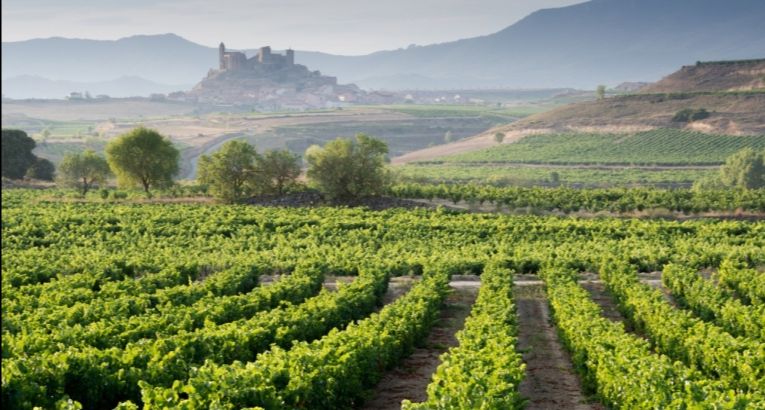 How often do you drink Rioja?? Not enough, exactly!

Let's be honest - most of us who are interested in wine grab more frequently for a bottle of Bordeaux or Burgundy than a Rioja. But the Spanish flagship wine has so incredibly much to offer, that one of our resolutions for the future will be to face towards that region a lot more often.

Rioja is located in North Central Spain, just about 100 km south of the city of Bilbao, where it follows the upper river Ebro. The roughly 64.000 hectares (about twice as large as Burgundy) are flanked by the Cantabrian Mountains to the north and west. This gives Rioja a really unique climate, with Atlantic, Continental and Mediterranean influences. In other words, hot summers and cold winters with relatively high rainfall. Perfect for grapes to ripen!

More than 90% of the area are planted with red varieties, mostly Tempranillo and Garnacha (about 95%), with smaller plantings of Graciano and Mazuelo (Carignan). All these red varieties are used for red wines sold under the appellation Rioja, too. But there are also incredible white wines, mainly made from the region's white grape varieties Viura and Tempranillo Blanca (about 85%), as well as Garnacha Blanca and several others. In general, the Rioja appellation allows many different varieties (including some modern "international" ones like Cabernet Sauvignon, Chardonnay and Sauvignon Blanc), although the Spanish varieties Tempranillo, Garnacha (for reds) and Viura and Tempranillo Blanca (for whites) are dominant.

Traditionally, ageing has been of special importance in Rioja (for both reds and whites), and the amount of time that a wine spends in barrel is directly connected to the quality categories, ranging from Joven, then Crianza, to Reserva and Gran Reserva.

Joven Rioja is the entry-level quality and has only been aged in oak for a short time, usually a couple of months. As a consequence, those wines are very young and mostly to be consumed within a couple of years.

Crianza wines are aged for at least one year in oak, and an additional one in bottle, before being released in the third year. White Crianza wines must also be aged for two years, of which only six months in barrel.

Reserva is only made in years that were considered to have had a particularly good growing season. The wines must be aged at least 3 years, with at least one year in oak for reds, and 6 months for whites.

Gran Reservas are only made in exceptional vintages, where perfect grape material can be obtained. Moving up the ladder on the oak ageing scale, the reds must undergo at least 2 years of cask ageing and 3 more years in bottle. White Gran Reserva must age for at least 4 years, with a minimum of 12 months in oak.

One might wonder about this obsession with oak. It all started in the late 19th century, when phylloxera, a small aphid hungry for the root sap of vines was ruining most of Europe's vineyards. French wine merchants were looking for new supplies, as most French vineyards had been devastated. It was them who introduced the oak barrel, standard equipment in Bordeaux back then, to Rioja winemakers. They liked it so much, that they integrated them into their winemaking processes. And guess what, a couple of years later phylloxera also visited Rioja...

While these most annoying little insects are gone by now, the pronounced oak aromas have become a quintessential component to both red and white Rioja wines. Today, many in the know would put Rioja on a level with the best wines from Bordeaux and Burgundy. And in fact, the wine shows some of the characteristics of wines from these French top regions. Rioja has a similar tannic structure to Bordeaux, and a berry-dominated fruitiness one can also find in top Burgundies. It ages extremely well, and in fact, is best to be opened after 10-15 years of additional cellaring.

But as always, the best way to get to know and understand a wine is not to only read about it, but try it yourself!